Marines use a sensor-mounted unmanned ground vehicle to check for chemical biological contamination before they enter a simulated hostile village during Perceptive Dragon 3.

During a chemical or biological agent attack, a commander has to fight uncertainty and confusion just as much as the agent. The Defense Threat Reduction Agency (DTRA) Chemical and Biological Technologies Department and the Joint Program Executive Office for Chemical, Biological, Radiological and Nuclear Defense (JPEO-CBRND) are keenly aware of this and are actively advancing technologies to better identify chemical biological threats, establish situational understanding, and continuously monitor responses to the threat.

The demonstration included an amphibious raid on an island by U.S. Marines, establishment of a lodgment on the island with both Marine and Air Force units, maneuver to a mainland with the Air Force unit and, finally, destruction of the enemy by the Marines in an urban battle – all set in a chemical biological environment.

As part of the exercise, members of the Center’s Nuclear, Chemical, and Biological Battlefield Integration Branch provided software plug-ins that they developed to directly input IEW data into each service’s existing common operational picture software. At the brigade level, the Marines used the Joint Tactical Common Operating Picture Workstation (JTCW), and in the Air Force Joint Operations Center they used the Joint Warning and Reporting Network (JWARN).

“The Center used its own software, called Parrot, to parse relevant data coming from multiple sources and move it throughout the squad and company level networks using the Army’s Integrated Sensor Architecture (ISA) protocol,” said Maxwell Bottiger, a senior computer engineer at the Center. Those sources included chemical and biological detectors mounted on Marine and Air Force unmanned aerial and ground vehicles (UAVs and UGVs); acoustic and seismic sensor feeds; radar feeds; intel feeds; force protection assets such as cameras; and even physiological status monitors attached to the Marines’ and Airmen’s bodies that measure heartbeat, body core temperature, and a calculation of heat strain.

All of this data was made available via ISA to individual Marine and Air Force company-size units through an existing localized software called the Tactical Assault Kit (TAK). TAK resides in an Android phone or tablet and through a set of plugins developed by the Center. It can control a UAV or UGV, read the sensors mounted on them, and post alerts. Marines and Airmen on the squad level were able to feed this data to the broader JTCW or JWARN network at the battalion level. “Thus, the Center’s IEW architecture proved itself to be both horizontally and vertically integrated,” said Bottiger.

“All this data provided potentially lifesaving information from the squad level all the way up to the battalion level by providing a bird’s eye view of the chemical and biological agent threat picture on the battlefield,” said Fiona Narayanan, chief of the Center’s Nuclear, Chemical, and Biological Battlefield Integration Branch and project team lead. 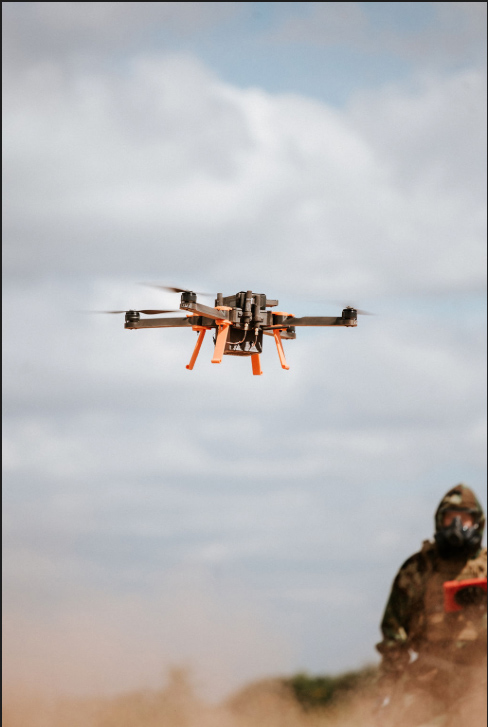 Marines and Airmen use a sensor-equipped drone to enter an area suspected of chemical or biological contamination during Perceptive Dragon 3 at Marine Corps Base Quantico Sept. 16-19.

“This software came with a new and important capability for IEW. Command and control at the battalion level could easily be overloaded with incoming data if it received an unfiltered amalgamation of all squad and company level data. So, the Center, in partnership with commercial vendors, developed software that correlates all of the local data into an overlay map color-coded by hazard. This capability gives commanders unrivaled chemical biological situational understanding at a level of detail customized to their needs,” Narayanan added.

The software generates an overlay map that allows battalion level commanders to direct the chemical biological response. Marine and Air Force units could be told whether and when to don protective gear or be given a path to simply move around identified hot zones. This big picture data was also used to arrange the logistics for getting protective gear to units quickly and set up decontamination stations for simulant-exposed Marines and Airmen.

The Center also used a commercially built software program to combine the data coming from each of the chemical biological sensors to identify indications of the presence of agent below the detection threshold of any individual sensor. In Perceptive Dragon 3, the system collected sensor data to do just that and succeeded in identifying simulated agent at very low levels that had eluded any single sensor. The data was used by command and control to direct the force on the ground to suit up in time or stay out of the area. 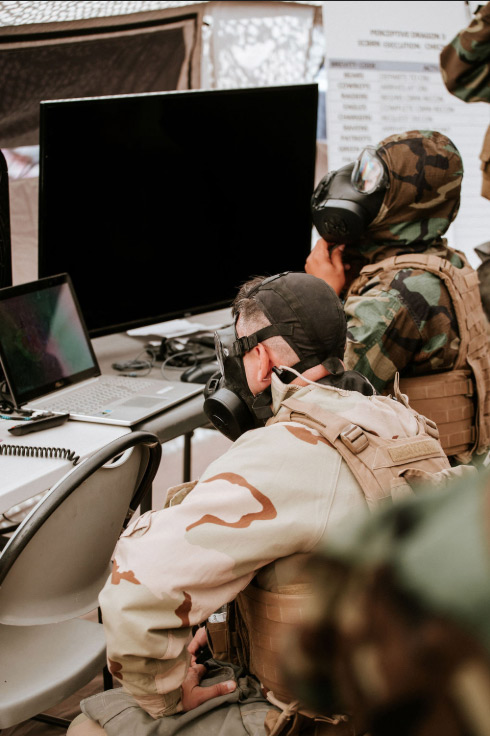 Participants in Perceptive Dragon 3 use advanced software to correlate all of the area sensor data which is then integrated into an overlay map color-coded by hazard.

As the exercise progressed, the plot thickened. A force protection camera feed identified a suspicious looking adult who moved a 55-gallon drum out of a warehouse and into the urban area. A sensor-bearing Marine Corps drone followed him. An Air Force unit did a sensitive site assessment of the warehouse the drum was taken from. Using chemical sensor payloads on both a UAV and a UGV, they were able to inform the commander that there was not a chemical biological threat. The Air Force unit then simulated blowing up the warehouse.

Next, a Marine unit entered the village and began investigating the building that the suspicious male moved the drum into. The Marines used a UAV and a UGV to place chemical biological sensors around it. Both vehicles also had video cameras which gave the Marine unit and its commander ongoing birds-eye view surveillance. Physiological Status Monitors were used to monitor the Marine squad; using this technology, the squad leader was able to monitor his squad’s vitals in real-time. The exercise then simulated the suspect blowing up the building. The Marine unit entered the blown up building in protective gear to perform a chemical biological assessment.
The exercise concluded with an IED going off near the Marines performing the assessment. The sensors on the UAV detected that the IED detonation included simulated agent dispersal, sent out the warning immediately, then delineated the zone of contamination. All the while, a second UAV kept a continuous video feed going to the Marine unit commander.

In the exercise debrief, the Marines and Airmen who participated shared their excitement about this new technology with the Center’s personnel. “We didn’t need to go downrange, we could just use the drone. That kept everyone safer and gave us all the time we needed to test by using it instead,” said Cpl. Riley Bush of the 1st Marine Division.

“It was a good asset,” added Lance Cpl. Bruno Gonzales, also of 1st Marines. “You could see where everyone was downrange, see the hazard cloud, and see where it will get to.”

Staff Sergeant David Cheatum of the U.S. Air Force’s 87th Civil Engineering Squadron agreed. “We’re not putting anyone in harm’s way. We are so far back that if there was contamination there, we wouldn’t be affected by it. The system saves time, saves people, and saves manpower.”

Marines use a sensor-mounted unmanned ground vehicle to check for chemical biological contamination before they enter a simulated hostile village during Perceptive Dragon 3.