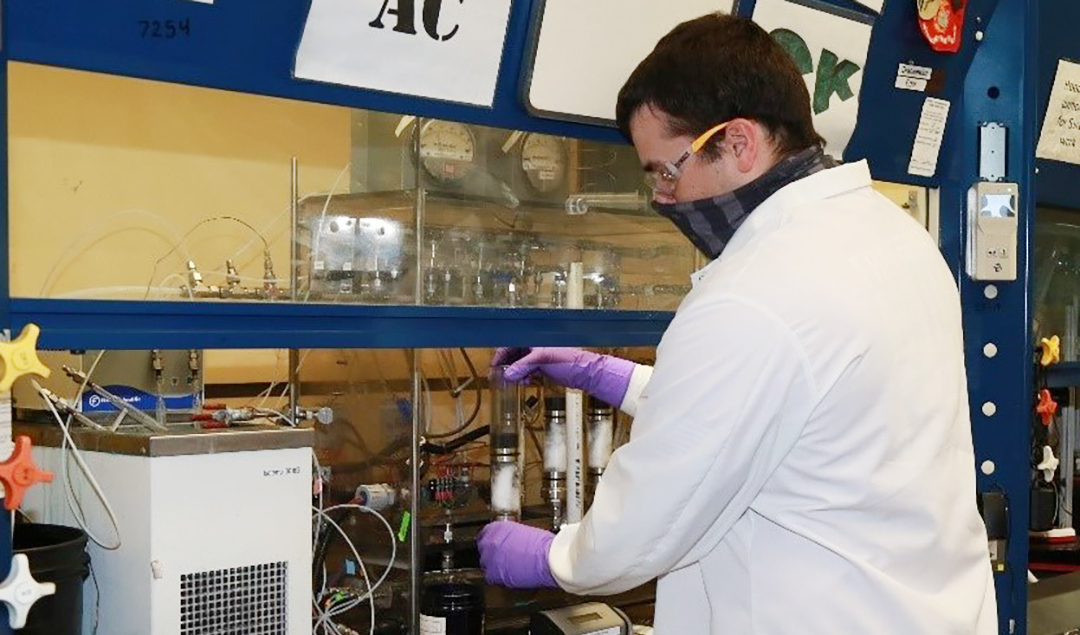 Aaron Salgado, a DEVCOM CBC chemist, places a tube containing a layer of carbon from the second source into a testing system that will analyze the time it would take a chemical agent to break through it.

Aberdeen Proving Ground, MD — A new qualifying standard for military grade carbon used in gas masks and protective filters has been developed by a partnership of experts in chemical and biological protection, eliminating U.S. reliance on a single source for this critical material.

It all began in 1992 when the DoD replaced the chromium-containing carbon it had used for 50 years with a safer, but harder to obtain, carbon for gas masks and protective filters. This safer carbon is known as ASZM-TEDA, which is an acronym for the metals imbedded in it as part of the supplier’s manufacturing process. These metals are less toxic and safer for the user than chromium. The formulation was developed by the Center scientists working with the supplier. The problem was that only one supplier had the ability to mine the material and to treat it with this mix of metals.

DoD first assembled a team in 2012 to solve the problem. It launched a project it called Activated Carbon Capability Expansion, or ACCE, under the Defense Production Act Title III Office. The project’s mission was to qualify other sources to supply military-grade carbon, the key filtration technology used in gas masks and large-scale protective filters. In 2016, DoD awarded a contract to its existing carbon source to expand its capabilities and another to a second private business to serve as a second source entirely.

The newly stood up ACCE team went straight to the Center for its expertise in protective carbon testing, and also because the Center scientists established the original qualifying standard for ASZM-TEDA in the late 1980s. This standard is known as MIL-DTL-32101, and it was relied upon to test the sole supplier’s carbon from 1992 on. The ACCE team had originally hoped to go on using that standard for qualifying any new vendors. However, when ACCE found a second supplier and awarded a contract to it, the experts at the Center advised against it.

“We had to tell the ACCE team that, no, 32101 alone is not enough to qualify a second vendor,” said Lowry Brooks, acting deputy director of engineering at DEVCOM CBC. “That standard had been in use since 1992 because all the carbon delivered for filters came from the same vendor, mining the same material from the same mine, impregnating the carbon with the same metals the same way.”

Brooks and his team persuaded the ACCE project team that with an additional carbon source, none of those steps would be performed exactly the same way. A more comprehensive qualification standard would be needed. The Center formed a team that included nine of its branches, each with its own expertise. They worked overtime to meet a strict DoD deadline to develop a better standard. The result was MIL-DTL-32101B.

While this was a significant accomplishment, it was clear that further improvements to the specification were required to confidently qualify new carbon suppliers. The updated specification was more comprehensive, but it still relied heavily on limited historical data points. Getting up-to-date data through current live agent tests would require more funding.

The Center persuaded the ACCE team that because protective carbon is a life-supporting material, it was vital to base the standard on current testing. The standard also had to be expanded to include chemical threats that have emerged since 1992. In addition, the Center needed to calculate the shelf life of protective carbon material under tropical, desert, and arctic conditions.

The alternative – relying on old, less comprehensive data – would not have qualified the new vendor with enough confidence. In fact, without current real-world testing, the new standard might not even be able to qualify the current vendor’s expanded capabilities. The more expensive path turned out to be the only path, and the Center collaborated with the ACCE, the JPEO-CBRND and with U.S. Army Tank-Automotive and Armaments Command (TACOM) to secure funding for the Center to perform a year-long study.

The team of nine Center branches performed the necessary testing and established a current data set over the course of 2018, and in 2019 they started updating the specifications for MIL-DTL-32101B. The architect for all this was Ryan Bearekman, the Center’s program manager for the effort. “The work spanned a lot of areas and disciplines,” said Bearekman. “We needed chemists who could design and perform tests to challenge the carbon using a wide range of live chemical agents. And, we needed people trained in how to stress the carbon in our unique environmental chambers that simulate arctic, desert, and tropical conditions.”

Bearekman also needed engineers who understood the supply chain and experts in quality control and quality assurance of materials. He got both from the Center’s Rock Island, Illinois research campus. “The Sustainment Engineering Protection Branch provided the experts who were the real authors and architects of MIL-DTL-32101B. They have been working on military specifications for decades and knew exactly how to codify them so that they would be understandable to all.” Bearekman said.

A key feature of the new standard is that it is based on detailed measurements of the length of time it takes for agents to break through the carbon. Different chemical agents take different lengths of time to break through a carbon layer and render it no longer protective. Other variables that need to be measured are the breakthrough times of each agent at different carbon bed thicknesses and airflow velocity.

Finally, the overall effort needed to be overseen by a DoD management team. That is where the Defense Production Act Title III team came in. The team was staffed largely by experts from JPEO-CBRND. They functioned as an all-star team of program management experts. They ran the ACCE program interim project review meetings and made sure that the individual specialized technical teams functioned smoothly within the larger whole.

DoD accepted the updated standard, now known as MIL-DTL-32101Bw/AMD2, as the official new standard in 2020. It uses the new data to pass or fail batches of carbon material with a high degree of confidence so that users of gas masks and protective filters know they will be safe.

The new standard was quickly put to use to qualify a second vendor, a Colorado-based biosciences manufacturing company. It will also be used to qualify the long-time sole supplier’s second manufacturing facility which it plans to open soon.

“Once the second vendor has been fully qualified using the new standard and the original supplier has a second facility up and running, users of gas masks and protective filters throughout the DoD will no longer be just one production line or supply chain problem away from a serious supply disruption,” said Brooks. “Everyone wins, DoD, the user community, the new supplier, and the taxpayers who get the benefit of increased competition.”

A major user of this carbon will be TACOM. They provide storage, maintenance, and distribution of the collective protection filters used in armored vehicles and ships. The group chief who participated with this effort, Dave Franing, was very pleased with the result. “The Chemical Biological Center ensured all stakeholders were involved and informed through all stages of the project. The team’s technical decisions were reached after careful consideration of all stakeholder input. That inclusive approach was a key contribution to the success in qualifying a second source for carbon production.” 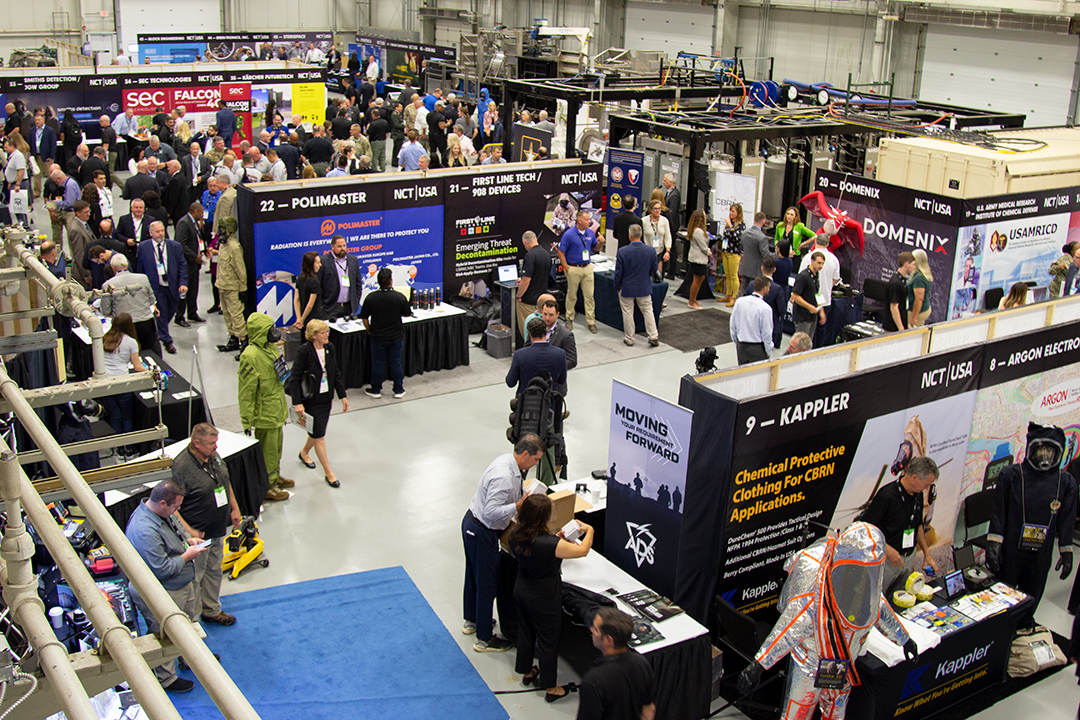